Up to this point we’ve talked about major tonality, and I showed some of the many possible fingerings for the major scale and for the three chords expressing the principal functions of Tonic, Subdominant and Dominant.

Now it’s time to take a look to the minor tonality.

First of all we must say that in a minor tonality three scales can be used. Those are called natural, harmonic and melodic.

Let’s start from the former.

This mode of the minor scale is characterized by these intervals:

These intervals define the following order of tones and semitones:

If we compare this scheme with that of the major scale, we see that the intervals differing from it are the third, fourth and seventh. They are now minor.

I’m now going to do the same I did for the major scale, considering four fingerings built on sets of three adjacent strings with the same 2 – 3 – 3 note-shape. This is what we get:

If we now talk about the chords of the principal tonal functions, since we are talking about a minor scale, the tonic chord will be minor as well. The same it is for the subdominant and dominant.

To keep it simple I now consider A minor tonality:

The tonic chord has one note in common (the first degree of the scale) with the subdominant and one note (the fifth degree) with the dominant chord. 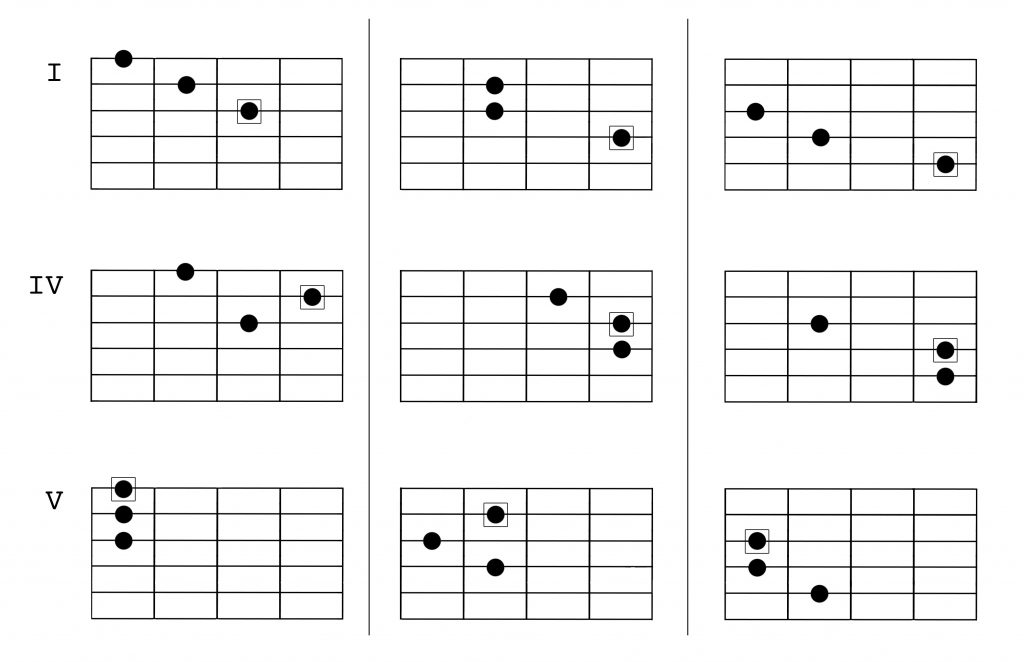 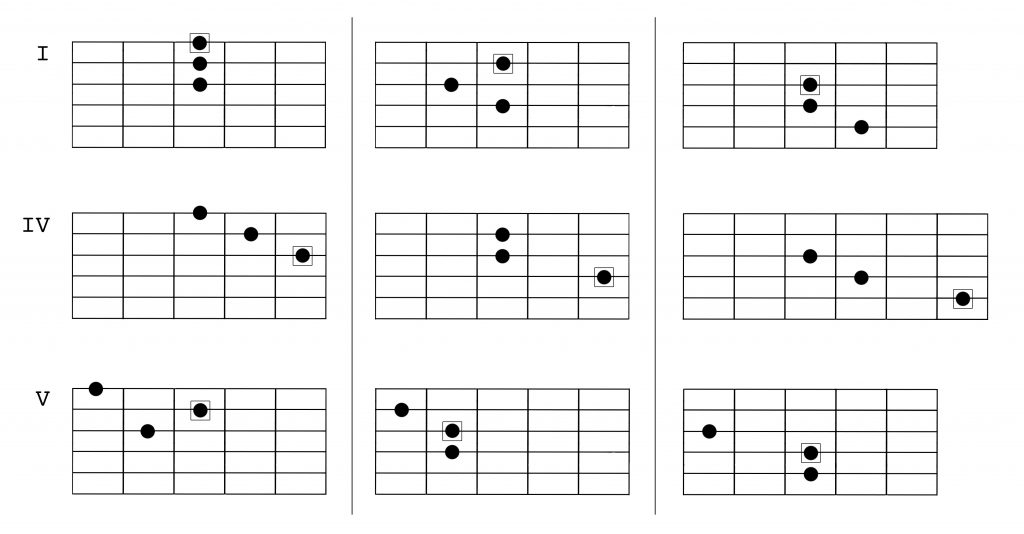 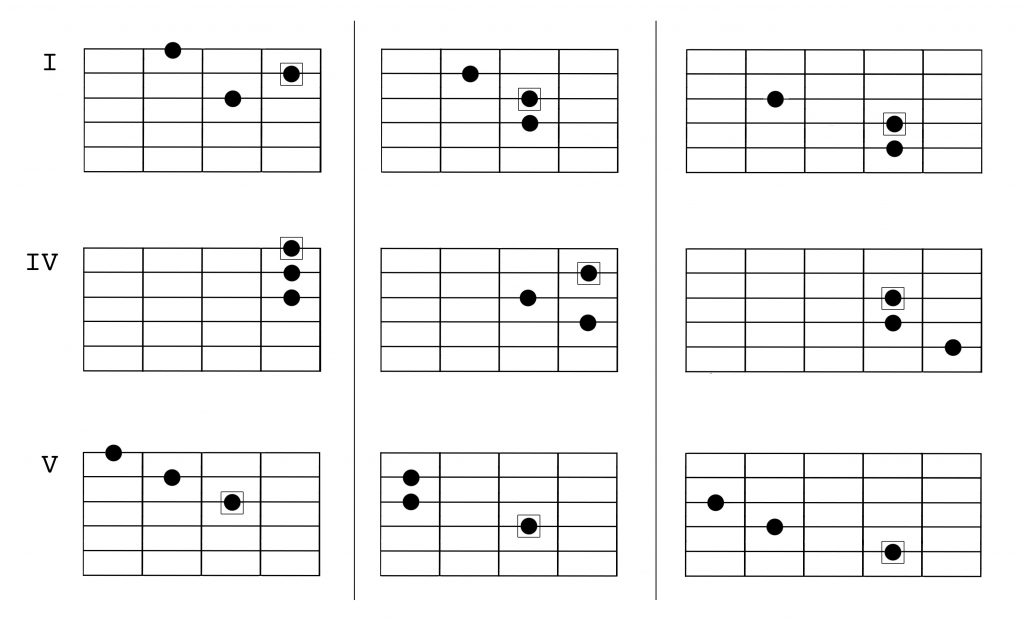 The harmonic minor scale differs from the natural only for the seventh degree, which is here major. The major VII scale degree is called leading tone because it usually leads to the tonic, a half step above it.

that for the sequence:

This scale is not only made by steps and half-steps, but we find here an augmented second interval between the VI and VII degrees, which characterizes this scale.

Just like it happens in the major scale, the leading tone is also the third degree of the major Dominant chord.

Since in the natural minor scale the chord built on the V degree is minor, in order to have the leading tone we have to make the Dominant chord major, “imitating” what happens in the major tonality. This is where this scale came from: since the strongest tool we have to define a tonality is the V-I cadence, it was felt the necessity to make it with the V chord major instead of minor. 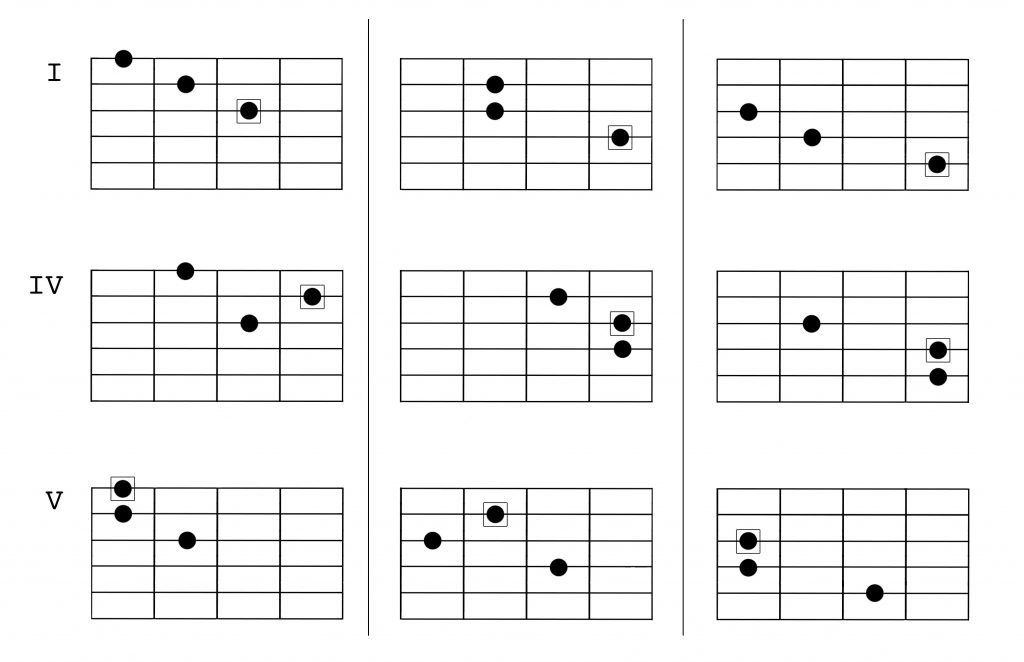 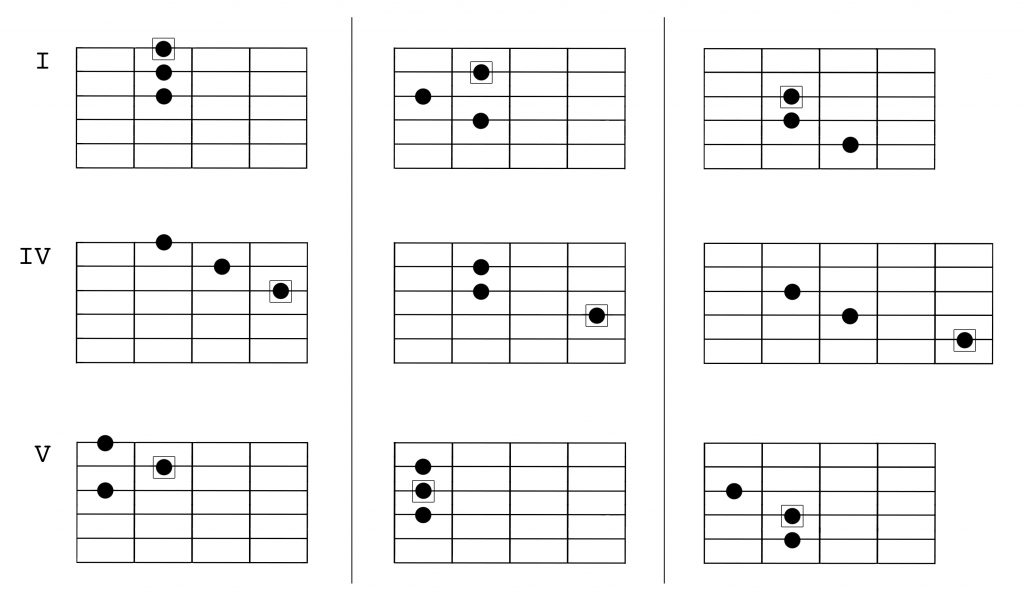 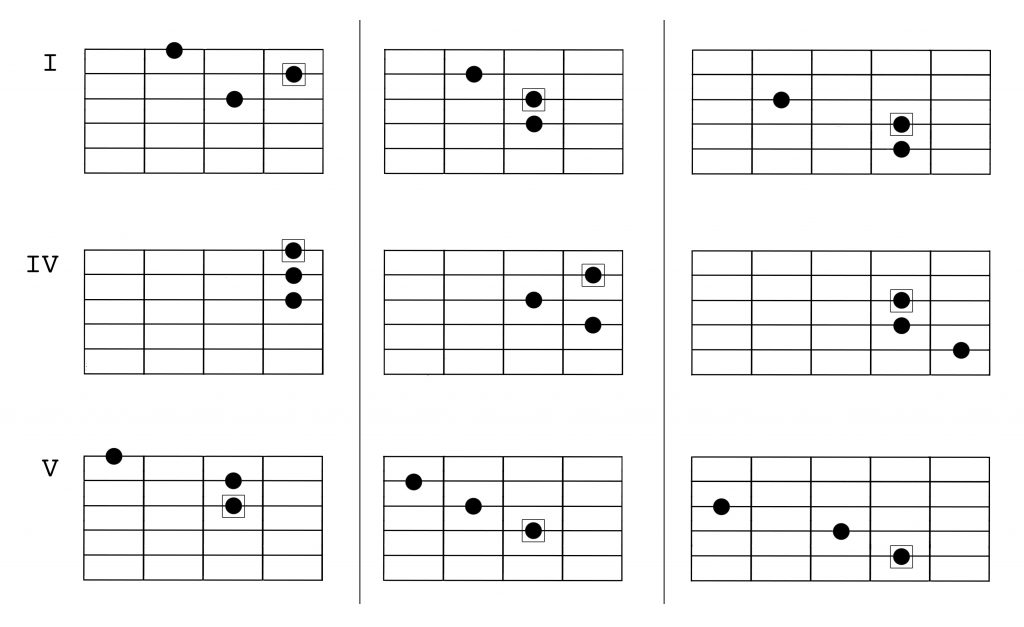 In melodic minor also the sixth degree is major. By raising this note we get rid of the augmented interval we had in the harmonic minor, making the scale again made only by tones and semitones.

and the sequence of steps:

There is now a sequence of 4 whole-steps, that gives the scale its particular sound.

This makes both the subdominant and dominant chords major, while the tonic triad stays minor. 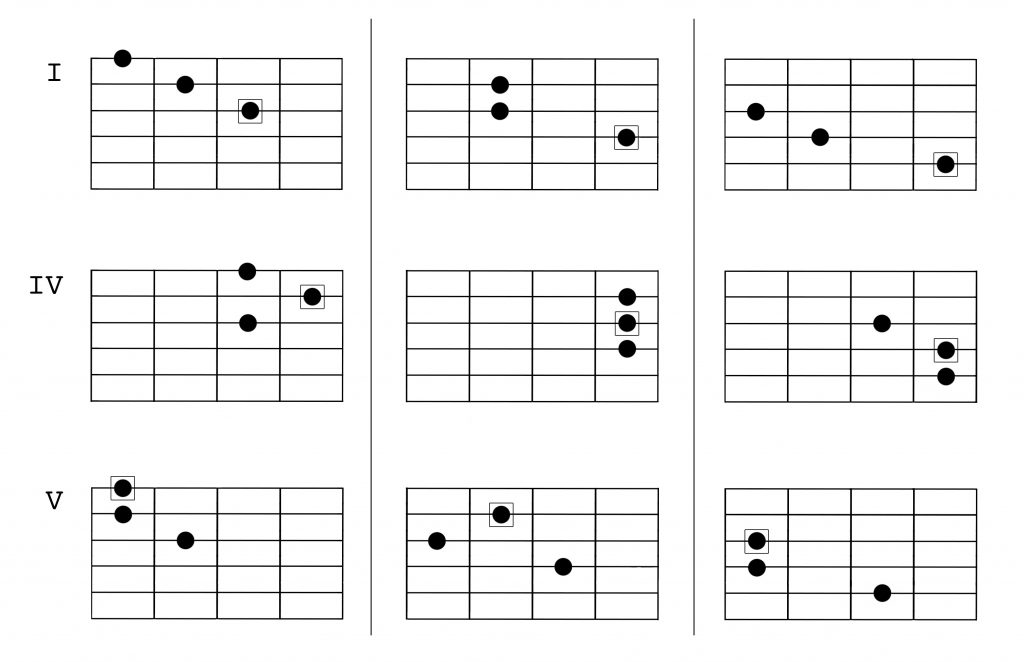 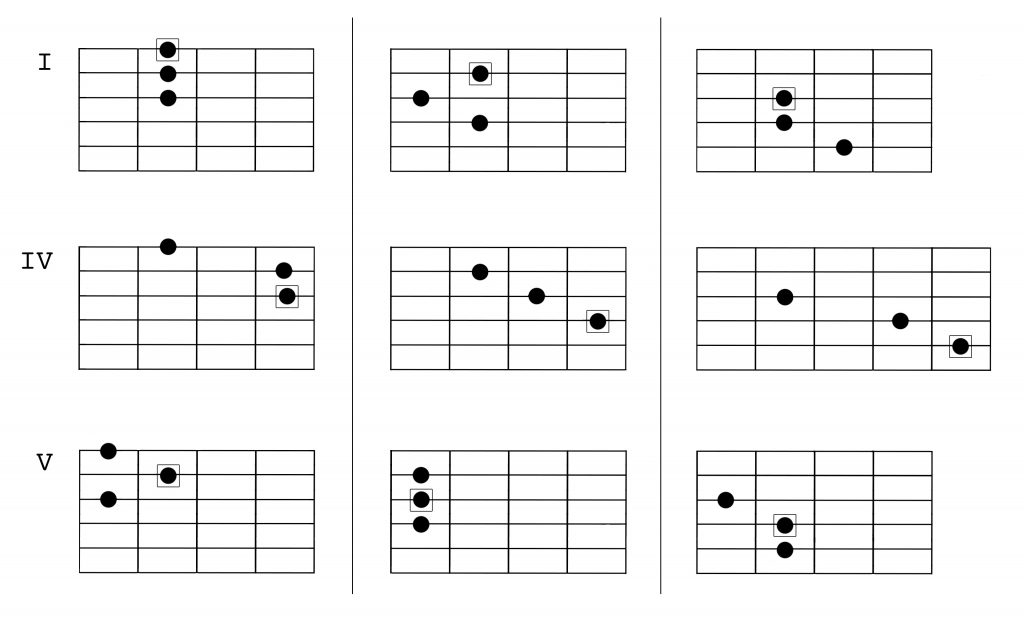 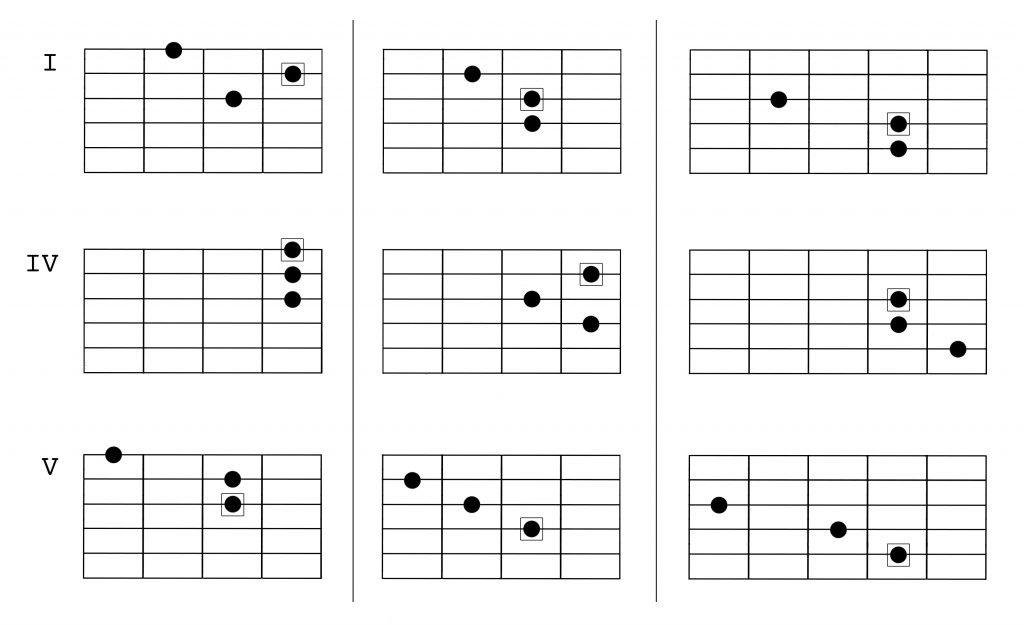 Well, there you have it, now let’s go make some music!