Lydian is one of the major modes of the diatonic scale (having a Major 3rd) and its typical feature is the augmented 4th, the only degree that changes from the Major scale (or Ionian mode).

As always, let’s start from the fingerings on the guitar. 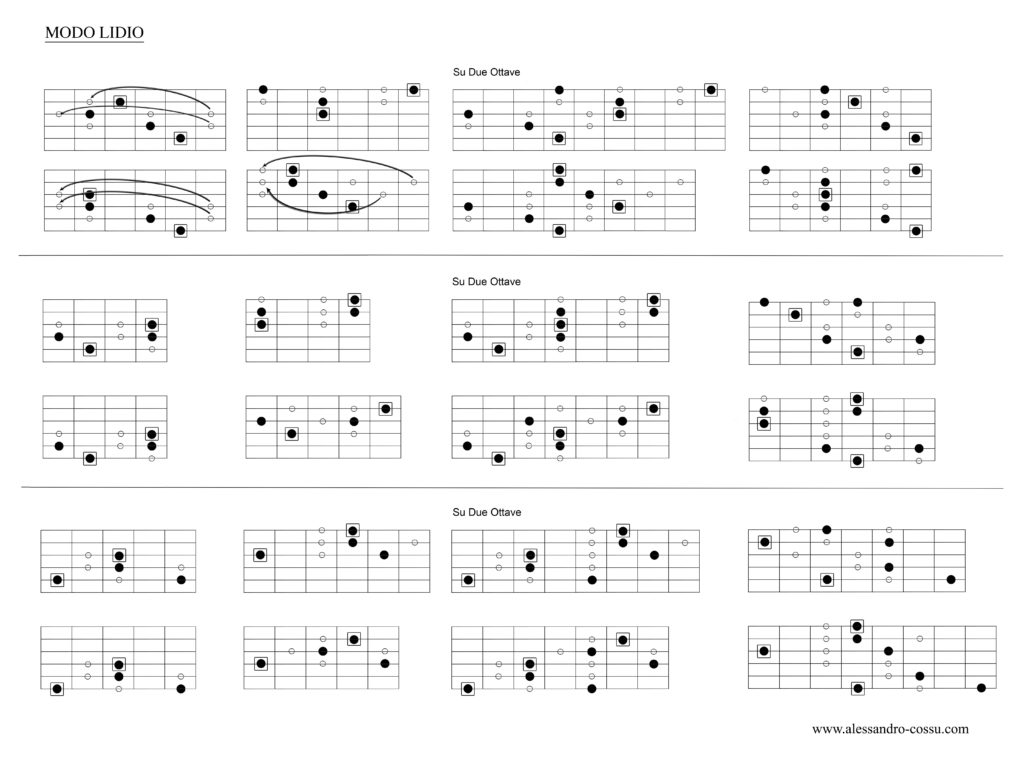 I’ve already mentioned the difference between tonal and modal harmony, which makes possible the distinction between a piece written in a Major tonality and one in Ionian mode and basically derives from a different use of the same seven chords (for instance in C Major and C Ionian).

If we are dealing with the Lydian scale we are clearly talking about a mode, so the only thing to remember is to make the I chord the pivot of the harmonic progression, going back to it with some frequency or using the root as a pedal.

Triads and seventh chords are displaced as follows on the scale degrees:

The Lydian Mode in Practice

I find that, to really understand modal theory while avoiding the typical error of considering modality and tonality somewhat the same, is very useful to start from a melodic idea.

We are generally used to a backward approach, that is starting from an harmonic progression and then playing on top of it, moving through the scale and searching for the “right” note.

Nonetheless, the harmonic thinking starts from the melodic idea, so it is always wise to approach any new topic from the beginning if you wish to really grasp it.

For this reason I’ve written a melody 8 bars-long clearly recognizable as “Lydian” even without the chords supporting it. (You can listen to it playing the video on top of this page)

Here I’ve choose Eb Lydian and I’ve indicated the implicit harmonization I had in mind, especially using the major chords Eb and F (I – II) that alone define the Lydian mode; at the same time I’ve avoided the Bb chord that could have shifted the modal center towards a Bb Ionian sound.

So, now it’s up to you to experiment with these ideas and most of all… listen!