In one of the previous lessons I started talking about quartal harmony, that is a harmony based on intervals of fourth instead of thirds (as it is in triads).

Now I’d like to examine these chords, finding their fingerings on the guitar.

Before going further, let’s remember that four notes, each one placed a fourth apart from one another, give us a fundamental tone, its third, seventh and eleventh.

This chord is made by the Root, minor third and minor seventh and perfect fourth.

In the following figures, chords are shown in their four possible inversions, found on adjacent strings. There are no repetitions of notes in different octaves. I’ve also included voicings in a “scalar” order (1-3-4-7) even tough they are in some case pretty much impossible to play due to the extreme extension on the neck; still they can serve as a reference to visualize the displacement of their chord tones, or they can be played melodically.

Another important clarification: by “second inversion” I hereby mean the case in which there’s the fourth at the bottom (since there’s no fifth in these chords). 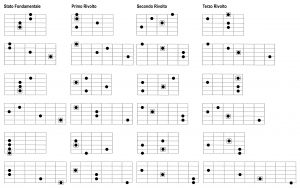 If the chord has a major third and major seventh, the eleventh can either be perfect of augmented. In the second case, this interval brings us a Lydian sound. Here’s the fingerings for this chord on the guitar: 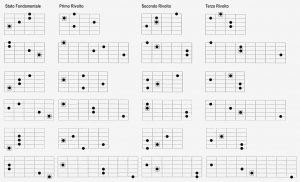 If the third and seventh are major and the eleventh is perfect, the appropriate scale is Ionian. 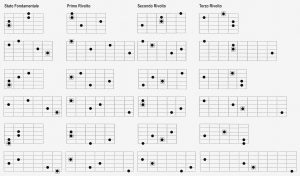 The last chord to be found when harmonizing the major scale in fourth is the Dominant 11th. 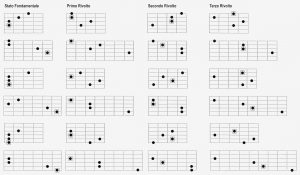 A couple of things can be noticed: