For a long time I gave little consideration to scales with open strings, but now I want to make things right.

I see this happening with many guitarists, especially those who play very distorted musical styles (which was the case with me in the early days). This has probably to do with trying to constantly keep all those noisy signals under control.

That’s why, for me, the appreciation of the tonal possibilities derived from playing with open strings came only at a later stage.

To start off, I’m going to take the 12 major scales and ordering them, starting from those who allow for all the six strings to be used (if your guitar has more than 6 strings, sorry! I can’t help you).

All The Strings Work Fine

If you don’t fancy using crazy or open tunings, there are three major scales where all 6 open strings can be used. These are C, G and D (this also means that there are three minor scales: Am, Em and Bm).

Watch Out for your Fingers

With A and F (and their relatives F#m and Dm) we find there’s one string not in the scale.

E (C#m) is the only scale with four strings usable. 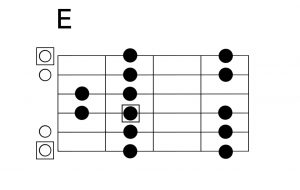 Well… you get the idea! 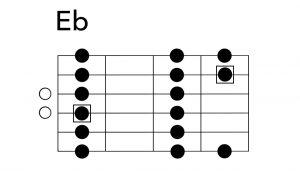 The only scale left is C#/Db (A#m/Bbm) which is also the only one that make no use of open strings.

But honestly, who is playing songs in this tonality!?